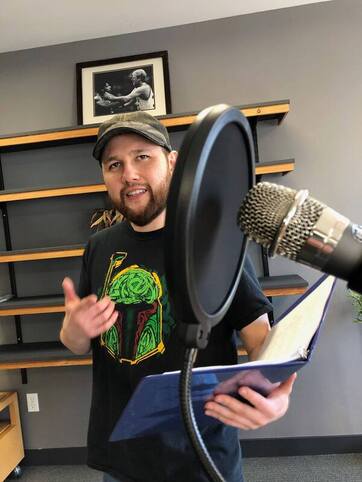 Christian Sterling Hegg has been involved in a variety of creative projects including performances in theatre, audio drama and independent film, professional graphic design work with apparel, film posters and book covers, cosplay crafting and most recently writing and producing a full length audio drama series.

Getting his start in theatre, Christian has taken many different roles on and off the stage as an actor, singer, dancer as well as working as a director and in general theatre operations. He has worked with professional and community theatre and production companies in New York, Utah, and Massachusetts.

In addition to acting, Christian been working as a freelance graphic designer, creating many different pop culture designs for t-shirts and the like, unique book covers for local sci fi and YA novelists and posters for small independent films under Sterling Arts and Design.

Another passion lies in cosplay where Christian has created many different mashups of fictional characters as the personality of That Fett Guy, using inspiration from movies, TV shows and video games.

Audio drama has been an early interest of Christian, but it was in early 2019, the first season of his sci fi radio series, Tales From The Dragon Eye Galaxy, premiered featuring many talented local artists. Inspired by old serials and pulp series, it was a new challenge that he happily embraced and is currently working on two more seasons.